A short survival-horror game, where you're a Scientist controlling Human Test Subjects to help you try and escape a bunker overrun by a hostile Entity.

The Game can be viewed as a hybrid of Classic PS1 Horror Games like Silent Hill and Resident Evil and modern horror games like Five Nights at Freddy's.

This game was developed in just 60 days by a 1 man team.

Hey, I'm looking for a new horror game to play, but I don't do well with jumpscares- does this have any?

It's hard to say. if you're saying like an FNAF Jump Scare of something screaming right in your face. No, that is not in the game.

This game is really interesting. I like it, but since I fudged up so hard I will do a second video about this. Though if your interested about my video, you can check it here.

I liked it a lot! My only issue is that the scares became predictable, and it took some of the fear value away from it. Other than hat, good job!

all your games are awsome alex, btw did u know itch.io has a discord :)

Awesome throwback to old school gaming, made me feel right at home with 3rd person fixed camera angles and I highly recommend this game for anyone looking for a short survival horror experience!

can you please make it for mac.

I am looking into it, I only have a PC.

Hopefuly you can make it.

I never played a game with this concept. You use possession to defeat a demon. It's awesome, it's unique, and it's fresh. Check it out!

Really creative concept--though, I do have some criticisms.

Having the entity chase you around constantly kind of kills any incentive for exploration. It puts you in a panic state and the last thing you want to do is spend too much time interacting with your surroundings. Perhaps the entity could have been triggered a little bit later in the game, once you've been given a bit of time to scope out the lay of the land. The fact that the game is monochromatic (not saying it's a bad thing: I appreciate the stylistic choice), and the fact that the architecture/level design is kind of bland, makes it difficult to distinguish where you are--this problem, again, is amplified when you're under stress because of the monster.

I don't want to make it sound like having a monster chase you around is a bad design idea. It's really not. But if implemented better, it wouldn't get in the way of the immersion and exploration aspect of the game (which is what I really like about survival horror).

Other than that, good job. Hope you continue making great games!

Reply
Zethjs3 years ago
Interesting game, very nice and polished but i would not say it's a horror game. The mechanics are great and the controls are nice.
Reply
ProofreadFire3 years ago

Really creative game. I love the mechanics of using other people to survive.

Reply
DizzY3 years ago
I had a lot of fun! Despite not understanding the controls a whole lot. i believe if you can simplify it. it will help with a learning curve. granted i don't understand how you would go about it! BUT! this game is a must try and love lore you here and there in the game.
Reply
Jthulu3 years ago

Honestly I like the controls. It's different and adds an element to master. :)

thats true! im not hating on the controls by any means.  felt a little off..but that could the very curve players may need to learn to get good at the game.

it was super hard for me. I guess i just suck though BECAUSE EVERYONE ELSE MADE IT JUST FINE

Reply
Neco The Sergal3 years ago

Finally was able to upload the game, last time I tried I had a sound issue (Thanks to SteamVR popping up), re-recorded and got new footage, feedback, suggestions and an ending achieved.

Unique style game, wasnt too sure what to do but still made really well non the less.

I totally enjoyed this game, the concept is really good

This game is so unique and interesting! Really refreshing to see something different being brought to the table when it comes to horror games. That being said, I am absolutely terrible at this game! I didn't even come close to beating it but I tried to make as funny a video as I could out of it! Here's my playthrough:

So this was the second game in the video starting at about 8:55 and holy crap this was so refreshingly unique and interesting! Loved learning how to properly control the humans and try to escape! Great Work!

Man i had a great time playing this! it reminded me of the old resident evil 2 and the best part of it is that you gave us a way to defeat the monster and it was still challenging. Great job

This game was a real surprise. Loved the nice mix of old and new horror elements used in it, it complimented each other very well! One thing I will say is that the atmosphere is lacking. adding music or tension building, or even something like flickering lights for a few of the rooms would really spice it up. Other than that, I had a fun time playing, ty!

I found the merge of old and new style of horror very interesting and for the most part, well done.

A few things I wish was in the game was a colored dot for each test subject just so the players know where they are. It was very easy for me to get lost since I'm not used to the FNAF style of horror games so it took some time for me to get use to this setup.

Another thing that threw me off was how easy it was to accidentally choose another test subject. I died once due to that since I like to move my mouse when doing things.

Other then those things, it's a great attempt to merge old and new.

Here's my channel for other games I have played. http://www.youtube.com/c/Levont

Amazing game, hard game, got to see every ending (and tried to trigger new kinds of endings as well :D)

Almost made it on my first subject. I was putting in the bypass key and he cornered me while I was on the inventory screen.

Hi there, I am a youtuber and I hope to get some support from you guys by leaving a like and subscribe at my channel.

I love the concept behind the game as to me it seems like a combination of SCP and FNAF which are some of my favourite games but I personally find many issues with the game currently.

I feel that the movement of the character in the screen could be done much more smoothly so that we can actually turn and run away quicker from the entity and maybe hiding spots can be created so that the characters can survive longer in the game. Moreover, the entity could be made such that once you enter another room, the entity will stop chasing you for a while because it is very frustrating once you meet the entity in the game and you cannot stop running away from it or escape from it. Furthermore, I do not know whether it is just me but I can't seem to find any weapons in the game XD.

The screen on the far right showing the cameras and room layout is a little redundant when we can't change cameras to find the entity to avoid it since it spawns randomly I think? It is also very difficult to navigate through the rooms while being chased and it is hard to pick up items in the game as well.

Thank you for reading my comment. Even though I have faced many problems in the game, I am actually looking forward to an update to the game and I would really love to play it when improvements are added to the game itself. Keep up the good work! :)

Thank you for the feedback, Though most of the issues you mention are more of your not into Old-School PS1 Horror style gameplay, or things you overlooked.

- Tank Controls are known to be slow and the game gives you a quick-turn function to quickly make a 180 turn. Also in the games Settings menu you can change the Movement Controls from Tank controls to Analog controls. which lets the character instantly face/move in the direction you point the analog stick (WASD Keys) towards.

- The Entity will stop chasing you, but only if he looses sight of you for a good amount of time, so you can't just enter a room and the entity just gives up, you need to keep running though a few rooms for it to finally looses you.

- While yes while you can't view the cameras on the right monitor, the Room Numbers on the Map Glitch whenever the Entity is in said room. This is mentioned in the Hints -&- Tips page that is on the left monitor before you start the Experiment.

So can't say that any future update I make to the game will remove the issue you might have cause they are a staple of Old-School Survival Horror gameplay that might not be your cup-of-tea.

Welp, thank you for telling me about what I did not know about Old-School PS1 Horror games. There is always something new to learn everyday :). I wish you good luck in your future endeavours :).

Thank you, and I wish you luck on your YT channel 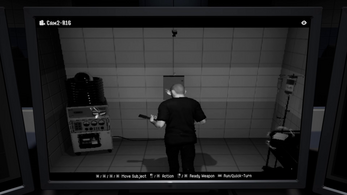 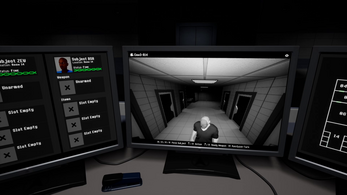 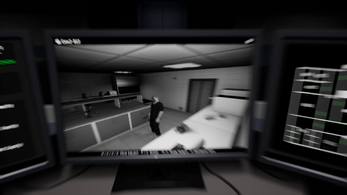 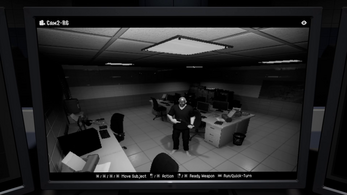